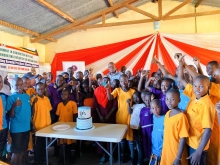 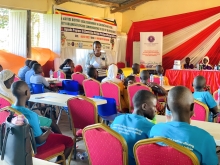 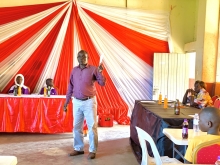 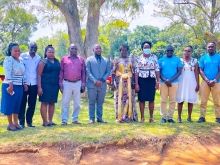 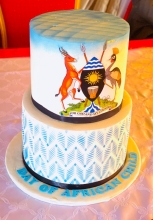 Mayuge district local government in conjunction with civil society organizations commemorated the Day of the African Child at the District farm institute-Ikulwe.

During this event, the Chief guest , Grade 1 magistrate Ivan Busuula applauded the District leadership and civil society organizations for being able  commemorate this day. He did children are the leaders of today because they give us hope, sense of direction, the desire to work harder, behave well, and sense of listenership. He however cautioned them on not listening to older men who defile them in pretext of wanting to send them . He further reminded the pupils of their rights and the need to be obedient and responsible citizens.

Also a young guest speaker , Musasizi sarah a p.6 pupil who is visually impaired from Bukatube sub county cautioned her fellow pupils against discriminating persons with disabilities, but rather give assistance to them.

The District vice chairperson Tasibula Nkwanga Peter also echoed his voice to these youngsters to stay in school , acquire an education which will help them secure their future. He mentioned that Mayuge has been reported to have a high percentage in defilement cases and teenage pregnancies especially in the last two two years. Covid19 Locked he said, contributed to this but since it’s no more , we need to do better as guardians, teachers, parents and pupils.

Richard Gulume Balyaihno the RDC while closing the event,(urged the teachers to call off the strike and go back to teaching because at the end of the day , it is our children that are on the losing side . Also called upon parents to stop violence against children